Naomi, you are absolutely right. The erroneous and simplistic news reports that you are trying to turn Al Gore from a Beta Male to an Alpha Male raise the question: Are there only two kinds of men in the world-the conquest-oriented, chest-thumping Alpha Man and the passive- aggressive Beta Man, who, one way or another, supports or undermines the Alpha?


As you requested, I've taken a deeper look at the other twenty-two letters of the Greek alphabet for image-repositioning ideas. We can rule out most of the letters right off the bat. Pi Man-Simple Simon might vote for him, but nobody else will. It sounds too much like a Seinfeldian baker. Upsilon and Epsilon just sound silly, as does Mu. Mu Man. Isn't that the nickname of the morning drive-time DJ in Milwaukee? At best, it's a vanity license plate for a dairy farmer. Omicron Man does indeed have "a nice technological feel" to it, but it comes from the Greek letter O, which looks like a big zero and, like Iota Man, sounds like the name of a very tiny Superhero. Al Gore, Eta Man. Leno and Letterman would have a field day with the cannibalism jokes, and I don't even want to speculate about what Howard Stern would do with it.

Sigmoid is too snakelike, and the phrase it gives its name to, sigmoid flexure, refers to "the contracted and crooked part of the colon immediately above the rectum," according to Merriam-Webster. Well, I don't have to tell you we already have far too many of those in Washington and more than a couple on the presidential primary trail.

Theta gives its name to the theta wave, which is a high-amplitude brain pattern, so it stands to reason that the Theta Man would be a real thinker, a brainiac. While this sounds good on paper, twitchy, high- strung eggheads rarely project a good leader image, spending as much time as they do pondering Fermat's Theorem, muttering to themselves and collecting their toenail clippings in large jars for future cloning experiments they plan to get to just as soon as they finish calculating Pi to the 20 billionth decimal and cleaning up the garage. Plus, nobody can understand a damn thing they say. We should stay as far away from this one as possible. Al already has too much of a rep as a geek.

Psi Man: This popular Greek letter has come to symbolize a range of paranormal phenomena, including mind-reading, psychokinesis, precognitive dreams and psychic healing. Tell me, has Al ever healed a sick person through sheer force of will? Bent a spoon with his mind or had a verifiable vision prefiguring a great world event? Imagine how handy this would be in negotiating peace treaties and trade deals, not to mention heading off wars, preventing deaths in disasters and subverting the entire population to our will once our man takes power. Get back to me on this one. This image has real promise if Al has any talent in this area.

The country might not be ready for a Lambda Man at the helm, though one can't help wondering how different the world might be if all the Alpha Men would go chop wood and build things and let the Lambda Men run the world for a while. Statistically speaking, it's likely to lead to a world that is smarter, more artistic, sensitive, sexier and stylish with tastier cuisine and more provocative theater. A Will & Grace kind of world. I could live with it, but I don't think this is the right image for Al or for Tipper, do you?

If the paranoid cultists and survivalists are right, and the apocalypse is right around the corner, who do we want leading the nation through the pestilence, famine and plagues of locusts? An Omega Man. Erase the image of moviedom's Omega Man, Charlton Heston, from your mind for a moment, and focus instead on the message of the Omega Man, the solitary hero, Renaissance Man and tough survivor with a strong heart who rebuilds humanity. Of all the presidential candidates, not one has that Omega male image. George W. reminds me somewhat of a smug Omega Tau Mu Man I knew in college who, despite pulling down Cs and Ds and once passing out in his underwear in a chapel birdbath, nevertheless managed to get elected president of his fraternity and then took a cushy job in his father's business after graduation. But there the Omega resemblance ends. Al is closer to the ideal, but not close enough-yet. Of course, we at Gore 2000 see the smoldering, strong but sensitive hero beneath Al's wooden, internal combustion-pondering exterior, but it may be too much of a leap for the public to make without help, given the trouncing he's been taking in the press recently. Position him as the Omega Man without the proper setup, and it's Dukakis in a tank all over again.

Perhaps what we need, really need, is a Nu Man, as befits a new century and a new millennium. Give Susan Faludi a call. If you two Alpha Women can turn Al into a Nu Man, maybe he'll have an Iota's chance in 2000. We in the S&S Division are pulling for you, and for our man Al, and we remain,


Chicky
Sparkle Hayter is an Omega Woman who writes satirical murder mysteries. Her most recent book is The Last Manly Man (Morrow).
- 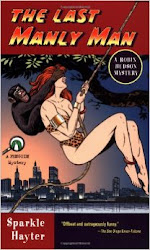